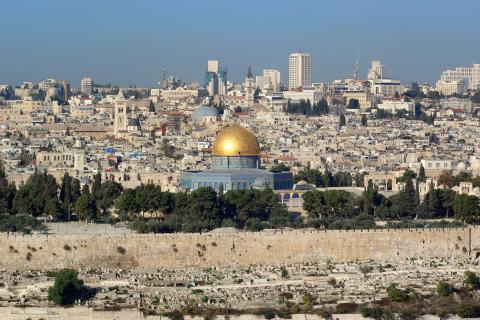 Jerusalem, the capital of Israel, is well known for its abundant historical and holy sites and fascinating tourist attractions. A city sacred to Christianity, Islam, and Judaism, Jerusalem is a melding of past and present, of ancient roots and modern innovations. In addition, this thriving metropolis is rich in art galleries and museums, theaters and concert halls, restaurants and cafes, pubs and dance clubs.

The Hebrew University of Jerusalem is Israel’s first university and a symbol of the cultural rebirth of the Jewish nation in its ancestral homeland. Founded by such luminaries of the twentieth century as Martin Buber, Albert Einstein and Sigmund Freud, the University has become a multidisciplinary institution of higher learning and research, as well as a scientific center of international repute.  Today, 24,000 students, from diverse ethnic and religious backgrounds, study on the University's four campuses, including some 1,200 students at the Rothberg International School. The School has become an international arena, a magnet that attracts students from around the world. They converge here to find intellectual challenge, religious bonds, political analysis and cultural activity. In the hallways of the School you will hear the sounds of Hebrew, Arabic, English, Russian, Polish, Spanish, French, German, Italian, Swedish, Norwegian, Korean and Japanese. The Hebrew University brings all these students, from over 50 countries, together in Jerusalem to share a common experience in Hebrew — their new common language.