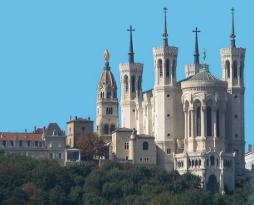 The third largest city in France, Lyon is home to over 1.5 million people. It is located in a dramatic setting surrounded by hills at the confluence of the Rhône and Saône rivers. Its location on a major trade route between Northern Europe and Italy made Lyon an important city of the Roman Empire. During the Renaissance it was a center for humanist scholarship, printing, banking, and the newly-established silk industry. Lyon continues to grow as an industrial, cultural, and gastronomic center. Today it is one of France’s most prominent centers for European business.

The Lyon program is ideal for students in a variety of majors who have a solid base in French language and are hoping to experience cultural immersion in the French context. The year-long Lyon exchange program is a unique opportunity for students to improve their French proficiency and expand their academic training in general-education, major and minor courses within a French university. The language of instruction is French, with only rare exceptions.

There are two types of year-long study in Lyon. Most Oregon students in Lyon make use of the language institute courses offered at both the Institut de Langue et de Culture Française (ILCF), which is part of the Catholic University, and the Centre International d‘Études Françaises (CIEF), which is part of Lyon 2. Students arriving in the Lyon program with less than three years of college-level French completed will spend their first semesters studying French full-time at one of these two language institutes and then transition into more direct enrollment courses the second semester. Students whose French skills are sufficient may select from direct enrollment courses offered at any of four different universities in Lyon (Lyon 1, Lyon 2, Lyon 3, and the Catholic University). The universities are described in more detail below. Most students who arrive in Lyon with three or more years of college-level French completed are ready for direct enrollment starting the first semester and select their courses from regular university offerings.